There are a number of reliable indicators that show there is still some pent up real estate activity yet to be released going into 2016, including steady economic and employment growth, along with continued low interest rates. The chart below shows that about 23% of homeowners are considering putting their homes on the market. Historically, the percentage of homeowners who sell each year is in the 7-12% range. As values rise, more homeowners will be able to financially afford to sell (and buy another home), giving the housing market an extra 10-12% activity boost as those homes are put on the market and sold over the next 12 to 24 months. 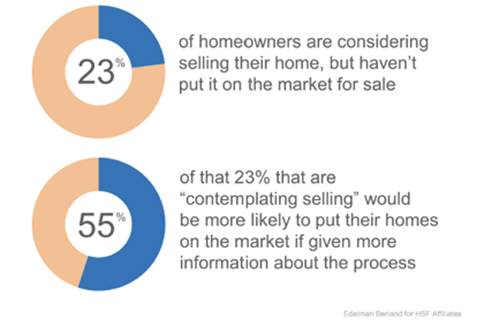 On the other hand, as more homes are put on the market, it will create more competition for buyers and value-increases will level off, particularly compared to the fast-paced appreciation rates of 2013/2014. The chart below shows that sellers’ expectations of value continue to rise above their actual appraised value, which will most likely lead toFor- Saleinventories being overpriced going into 2016, particularly in the over $400,000 price ranges. 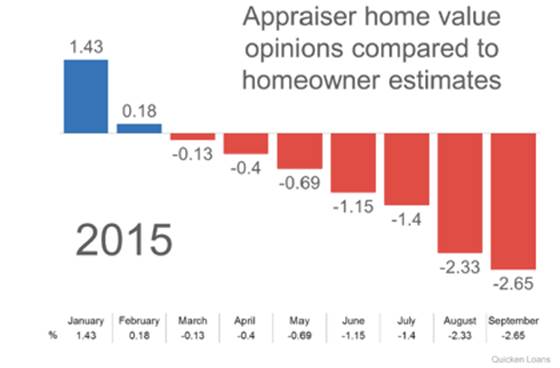 Specifically by price range, here are the latest activity trends for Southeast Michigan compared to the same time period in 2014:

Sales have picked up in the last 90 days with inventories still falling, as well as new listings, so sellers are smiling and buyers are frustrated.

Sales have been strong all year, with inventories also rising, until a slowing trend occurred for inventory within the last 90 days, firming up this market-segment to the seller’s side.

Sales are holding up well but slowing, along with the growth in inventory. This is the prime “move-up” market, where many sellers are buyers, meaning a rise in inventory and sales goes hand-in-hand, as the “move-up” homeowners both sell and buy.

Sales have been surprisingly strong with inventories still rising, but at a slower pace. The over $500,000 markets inventories have been building up for some time now so this is where sellers will feel a significant slowing, even with sales remaining strong year over year.

After a strong start in 2015, luxury sales have slowed down considerably, in addition to a continued rise in inventory, causing values to flatten out, and in some market areas, decline.

So what does this tell us? The market is making a directional shift from a strong Sellers’ Market to a more balanced market. When a market changes direction there are often mixed signals, such as strong buyer/seller interest, while at the same time, increasing inventories slow the market pace. It is still a great time to buy, with values not quite back up to peak levels, rates low and a more plentiful inventory to choose from in most markets. For sellers, buyer demand still remains strong, values will continue to rise, and for many sellers, there will finally be something for them to buy, breaking up the log jam we have had for the past two years, during which sellers were holding back because they could not find something to buy.

There is no bad news here, just different news, which will require buyers and sellers to set different expectations. If we are off on our projections of the market direction, it is more likely that hindsight will show we were too conservative, and the market will show more kick to it going into 2016, than less.

For ADA assistance, please email compliance@placester.com. If you experience difficulty in accessing any part of this website, email us, and we will work with you to provide the information.

Sign Up
Already a User? Sign In
You have been successfully registered
Please check your email.
Go to the homepage
Sorry something went wrong
Please try again.
Try again

Change password
Your password has been successfully reseted.
Go to the homepage
Sorry something went wrong
Please try again.
Try again
Already a User? Sign In